Out of This World BOM Block Eight: Space Named Candy
Pat’s theme this year, 'Out of This World!' all about space and this month is inspired by yummy things... maybe a few not so yummy, but all space-related!

The block pattern download is further down the page after Pat tells you about the inspiration for this month's block down below.

At the end of our posts each month we showcase two amazing quilt shops. You will be able to find new shops to visit on your travels.

Also be sure to visit Pat’s page for additional tips, hints, information, and to enter your block for a chance to win her giveaway each month! 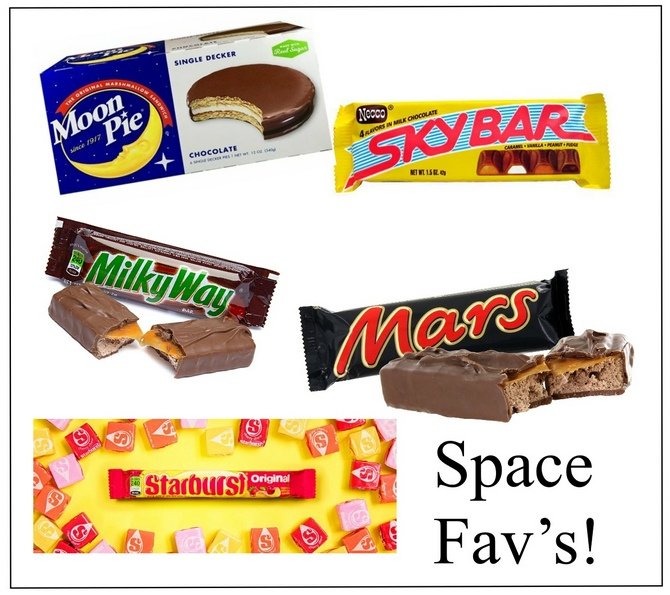 Pat Sloan About This Month's Block - Space Named Candy!
I had a LOT of fun with this research, and great memories too!

First up is the Mars Bar because it has great memories for me. Some history from Wiki:


"It was first manufactured in 1932 in Slough, England by Forrest Mars, Sr. The bar was sold in two different formulations. In its original British version the bar consists of caramel and nougat coated with milk chocolate, developed to resemble the American chocolate bar known as the Milky Way, which had been introduced a decade earlier. An American version of the Mars Bar was produced which had nougat and toasted almonds covered in milk chocolate; later, caramel was added to the recipe as well. The American version was discontinued in 2002, though it has been revived for short runs since then."


When I lived in Europe, getting a Mars bar was THE snack! They were smaller than bars now and we could get them in any store. I wondered why I rarely saw them anymore, now I know!

• The Sky Bar is was announced by a dramatic skywriting campaign in 1938.

• What is your favorite flavor of Starbursts? I need to get some and try all the flavors again!

• And I’ll toss in the Moon Pies in this category. My step-mom did a lot of work in Mobile, Alabama so we would often get Moon Pies on her return. From their website,


"It all began in 1917 when a KY coal miner asked our traveling salesman for a snack “as big as the moon.” Earl Mitchell reported back and the bakery obliged with a tasty treat aptly named Moon Pie. It was filling, fit in the lunch pail, and the coal miners loved it. The rest, as they say, is history." 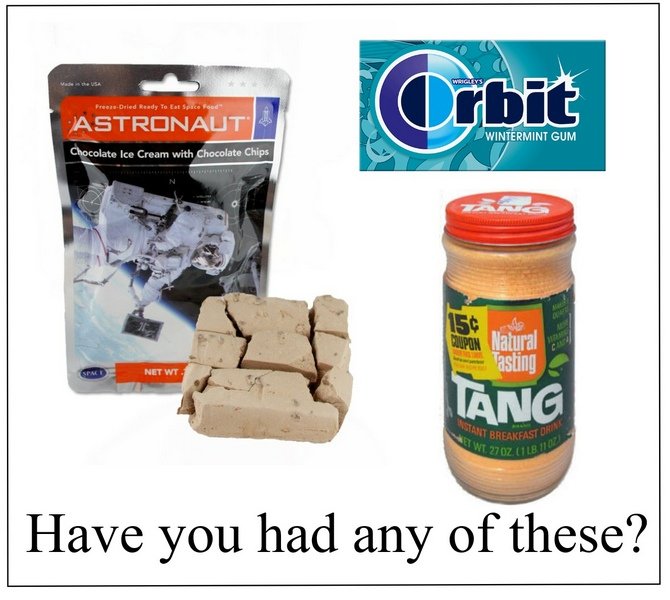 Second Group: The Classics
I knew I had to include the 'Astronaut' freeze-dried ice cream, but was it really created just for them?


"Freeze-dried ice cream is ice cream that has had most of the water removed from it by a freeze-drying process, sealed in a pouch, and requires no refrigeration. It is also known as astronaut ice cream or space ice cream, typically a slab of ready-to-eat dehydrated ice cream. Compared to regular ice cream, it can be kept at room temperature without melting and is more brittle and rigid but still soft when bitten into. It was developed by Whirlpool Corporation under contract to NASA for the Apollo missions. However, it was never used on any Apollo mission. Freeze-dried foods were developed so that foods could be sent on long-duration spaceflights, as to the Moon, and to reduce the weight of the water and oxygen normally found in food."


When we first moved to Virginia, we went to the Air and Space Museum in Washington DC often and that ice cream might have been one of my first purchases, I had to try it out! For the record, it's not my favorite.

A space-related food I had totally forgot about was Tang! This was SUCH a thing when I was in High School, and I didn’t like it at all, did you? It was not created for the space program but became popular after John Glenn’s Mercury flight where he drank it.

I have to add Orbit gum, do you remember all the crazy commercials for it? Look on YouTube, they are funny!

My quote this month:

"Somewhere, something incredible is waiting to be known." – Carl Sagan


Sign up to be the first to hear about each month's block!
Do you like this Mystery BOM?  If so, click the Like button below:
Are you loving our Out of This World theme this year? Leave me a comment below telling me about your favorite space-named candy!


Featured Shops
Meet another set of GREAT quilt shops this month! Once you download the block, visit them, it’s so fun to find new quilt shops to visit! 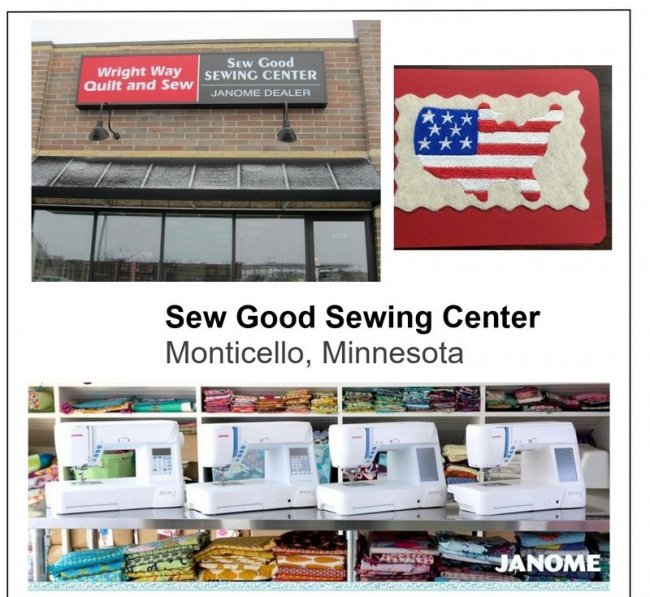 Welcome to Sew Good Sewing Center, a growing shop in Monticello, MN. We are an authorized JANOME dealer with many models to choose from and also a service provider for your machines. There is a combined sewing knowledge and experience here of over 50 years. Classes on many different machines and projects are ongoing. You can also call and request classes. There are many different notions, threads, embroidery collections, and books to choose from.
Come in, look around and enjoy the friendship and knowledge.
We are here to become your sewing destination. 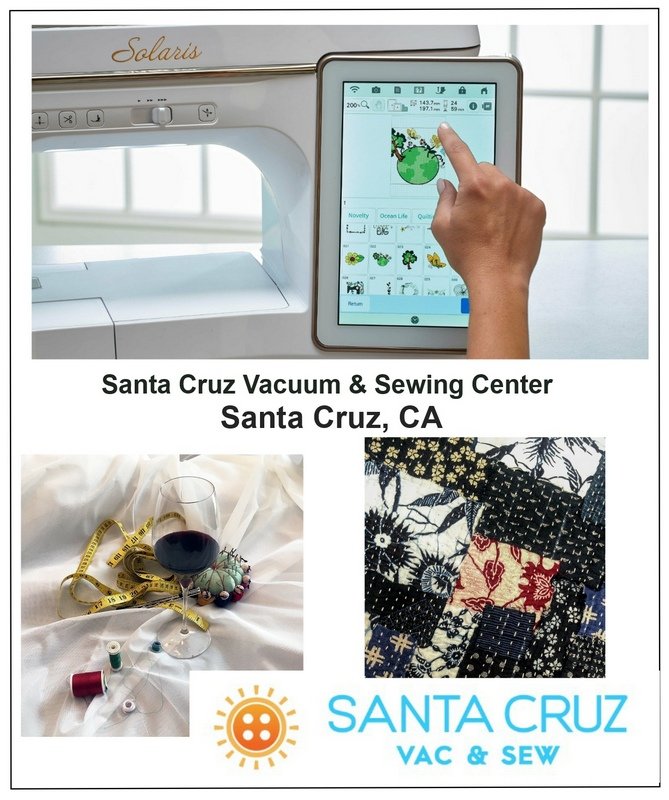 As a family-run local business, our mission is to provide our customers with an unrivaled experience of expert sales, service, & repair of vacuum & sewing machines, the finest quality & selection of fabrics, notions & supplies, all housed in a welcoming & creative sewing lounge & learning environment.

As the proud new owners of Judy’s Sewing & Vacuum Center, now Santa Cruz Vac & Sew, we feel we are uniquely qualified and committed to our ongoing relationship with the community and to you, our customers & friends of the store. Clare is a Santa Cruz native, and has longed to return to her beach-town roots & the pursuit of her life-long passion for sewing. Nick is a Bay Area entrepreneur with a zeal for making Santa Cruz Vac & Sew a fun, inspiring, and happy destination for customers, friends and family alike. We are thrilled and honored to be taking the torch forward to deliver the service and quality products you have grown to expect and to expand our in-store experience!

One thing is for certain, you can continue to count on Santa Cruz Vac & Sew to provide you with what you have come to expect from Judy’s: excellent service, quality products & helpful staff in a welcoming atmosphere!

Where you can find Pat:

• Join Pat at her quilting Classroom on Facebook! Share your mystery quilt!
• Also join FreeQuiltPatterns.info on Facebook.
• If we have not met yet... it's super nice to know you!... Click here to learn about me.

You can find all the places I hang out at my home page, it's my name http://www.patsloan.com/