Use Kaye Wood's View & Do Circle Shape to fussy-cut your favorite fabric or embroidery design inside three different sized circles. The layered circles can be used as is, OR the finished squares can be cut into square quarters (drunkard's path) or diagonally into triangles that can be rearranged to get lots of different designs. The circles can be left with raw edges, finished with a turned-under edge, or faced with a different color for a 3-dimensional look.

View Kay on Quilter's TV by clicking on the quilt below. 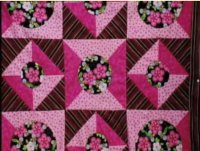 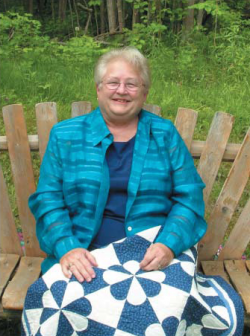 by Linda Turner Griepentrog
Describing herself as a “quilting engineer,” industry icon Kaye Wood calls herself a problem solver who is “not out to impress an audience with my knowledge, but to inspire them with what they can do.” Her show, Kaye’s Quilting Friends, does indeed inspire with numerous special guests and how-to segments. That simple philosophy has made her one of the best known quilters in the business, though few would guess that she actually taught quilting before she ever made her first quilt! She admits getting into quilting by mistake, as her lifelong adventure certainly wasn’t planned this way.

Kaye was trained in the Bishop Method of Clothing Construction and then taught freemotion machine embroidery classes in the Midwest. Student requests led her to quilting, so she read up on the subject, and soon after began designing templates for a 9-patch quilt, moving on to angle templates for stars. Now she has written more than 20 books and has a wealth of quilting templates, patterns and videos available to tempt quilters around the world.

Noting that her start in television was “an accident,” Kaye first taped videos to go with her books. She mortgaged the house to finance the television debut in 1988 and has now been on the air for 40 seasons of programming. This, in addition to numerous guest appearances on other quilting programs, so TV veteran is definitely a title worth bestowing on Kaye. Kaye now has several corporate industry sponsors for her work,
including Clover, OTT-Lite and Janome.

Kaye loves to bring guests on her show and especially new quilters whose work she admires. Guests aren’t paid to be on the show but are allowed to promote their own products or books to viewers in a subtle way
that PBS allows.

In January 2007 she took the next step into technology and started broadcasting Web videos, offering how-to information 24/7. Other people’s videos (Kaye’s quilting friends) will be available as well as her own. With
double-digit TV seasons behind her, there’s a wealth of information available that is timeless.

Kaye was born teacher and performer. She loves to do lecture/demo classes and delights in the feedback she gets from her students. When doing the television tapings, she views the camera as a live audience.

If she weren’t a quilter star, what would she do? “I’d probably give lectures about setting goals,” she quips.
She encourages people to “specialize in what you’re interested in and realize you can’t do it all.”

She adds, “Whatever you do should be 90 percent fun, or what’s the point?” Who influenced Kaye the most in her life? Without hesitation, she replies “Clotilde, for her wonderful business sense.” Over the years Kaye has developed a number of books, videos and products for quilters, and she notes that her biggest frustration as a business person is that shop owners don’t understand all the products they carry. She loves getting letters
from customers and viewers and notes that some of the most interesting ones come from prisoners.

Her philosophy is “If you have a number after your name, you can’t purchase a rotary cutter!” Kaye’s passion is cruising, and to date she’s hosted more than 26 sea-faring adventures for quilters. In addition to these water-based learning adventures, Kaye takes family cruises every other year.

Family is important to Kaye and she says there were never any difficult times in her life with five children (one girl and four boys), only fun times. Even at the funeral of her son who died of cancer, the family all wore Jimmy Buffett shirts and made a party of it, as he would have wanted. Imagine celebrating Margaritaville in the funeral parlor! 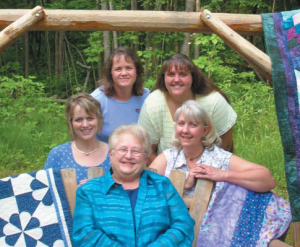 The children are spread over several states and involved in many professions. Two boys are engineers and her daughter manages Kaye’s Website. The third son she describes as a “streetwalker” -- his job is to hand out tickets to tourists for television shows in Los Angeles, but he’s really an aspiring actor.

Does Kaye have the perfect sewing room for her quilting endeavors? Noting that she actually makes most of her own quilts, she describes her large sewing area as a “total mess.” The room’s outfitted with wire shelves, counters, closets and lots of curtainless windows so she can watch wildlife, especially deer.

As a businessperson, Kaye says her biggest weakness is not liking confrontation, but she jokes about her hiring philosophy. Whenever a new person is hired at her company, she first polls other employees to find out what part of their jobs they don’t like, and those responsibilities are then given to the new person!

Believing that every child should have a quilt, Kaye started the LoveQuilt Connection to encourage quilters to
make quilts for charities around the world. She’s designed simple-to-sew versions specifically for this program that shops, guilds or other groups can use for charitable sewing events and community service projects.

If she were given a million dollars, she’d opt to invest it in setting up sewing related businesses in third world
countries to train women to be self-sufficient. Kaye notes that she’ll “probably be on TV forever” but would like to see the Web site video broadcasts take off so they require less of her involvement.

When asked about her epitaph, she quips that it should read “I did all I could to help others in the industry -- some take it, some don’t. My life was great fun!” For more information on Kaye Wood’s books, patterns and products, visit www.kayewood.com, and for Web video broadcasts, visit www.kayewoodtv.com.